Will Social Mood Oust Trump? Here's What to Watch.

Socionomics and electoral decision making expert outlines factors that could lead to President Trump's impeachment, despite his party's control of the Congress.

President Trump finds his administration embroiled in controversy and investigation. Two Democratic members of the House of Representatives, Al Green of Texas and Brad Sherman of California, have drafted articles of impeachment; Shermanhas actually filed them. History suggests that social mood will influence the outcome of this chapter in American history.

As we wrote in July 2013, “Politicians steer their careers only partially. Often, a more important driver is social mood. Changes in social mood can propel public figures from acclaim to ignominy, and vice-versa, from abhorrence to adoration.”

The Role of Social Mood in the Impeachment Process

Impeachment is a legal process, so investigation and facts play a role. But feelings and mood can shape the result because politics involves contexts of uncertainty and has large emotional components, arenas in which social mood is most influential. In a pessimistic, negative-mood environment, members of Congress might decide their political survival depends on removing the president from office, even if majorities in both chambers belong to the president’s party. In an optimistic, positive-mood environment, Congress might settle for public censure, a reprimand or nothing at all.

The House has voted to impeach a president twice in U.S. history. Social mood was trending positively in both cases, and in both cases the Senate voted for acquittal. Let’s review these instances, along with a near-impeachment whose outcome is instructive.

Figure 1 illustrates the timing of the first presidential impeachment. On March 2, 1868, the House of Representatives formally agreed to eleven articles of impeachment against President Andrew Johnson. The Senate took three separate votes, and each fell one vote short of the two-thirds majority necessary to remove Johnson from office. The Senate acquitted Johnson on May 26, 1868, during a stock rally that added to the 250% increase since October 1857. 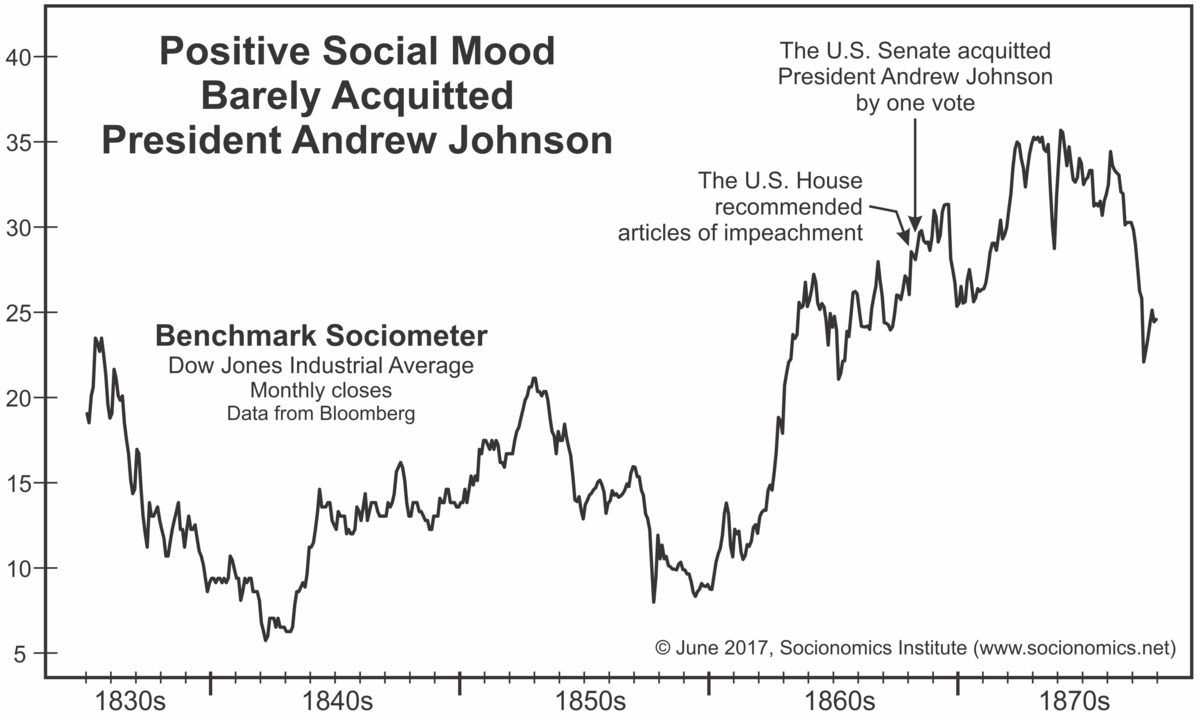 Figure 2 shows the timing of the second presidential impeachment. A substantial trend toward positive social mood preceded President Bill Clinton’s impeachment in the House and subsequent acquittal in the Senate. Note that some of the most serious events in the Monica Lewinsky scandal coincided with the largest downturn in the DJIA during Clinton’s presidency. Yet, as the Dow recovered, so did Clinton’s approval ratings. And despite a $70-million prosecution of Clinton’s related perjury and obstruction of justice charges, the Senate acquitted the president—as the stock market, reflecting social mood, broke out to a historic positive extreme. 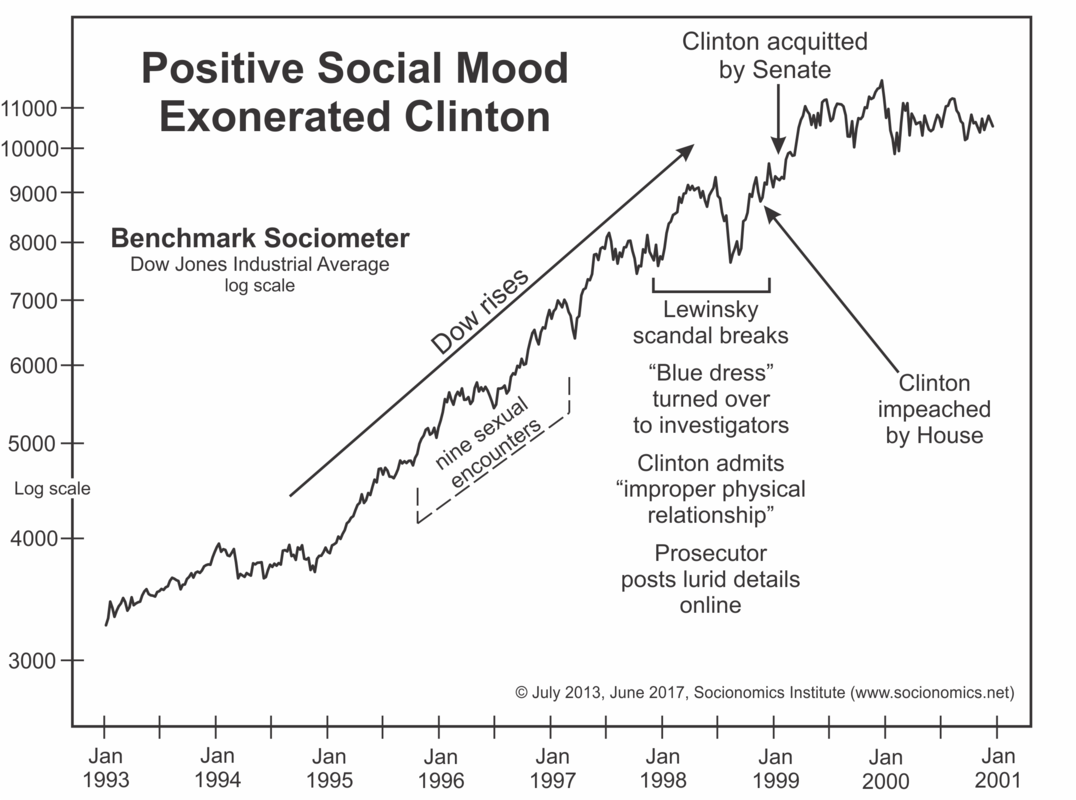 President Richard Nixon’s near-impeachment and resignation from office serves as a textbook case of how social mood influences the fortunes of public figures. Figure 3 shows that the infamous Watergate break-in occurred toward the end of a strong 67% rally in the Dow from May 1970-January 1973. Nixon won re-election in a landslide, but as mood grew more negative, the scandal heated up and Nixon’s fortunes changed. The public’s appetite for scandal increased and the investigation accelerated. With almost certain impeachment looming, Nixon became the first president to resign from office on August 9, 1974. 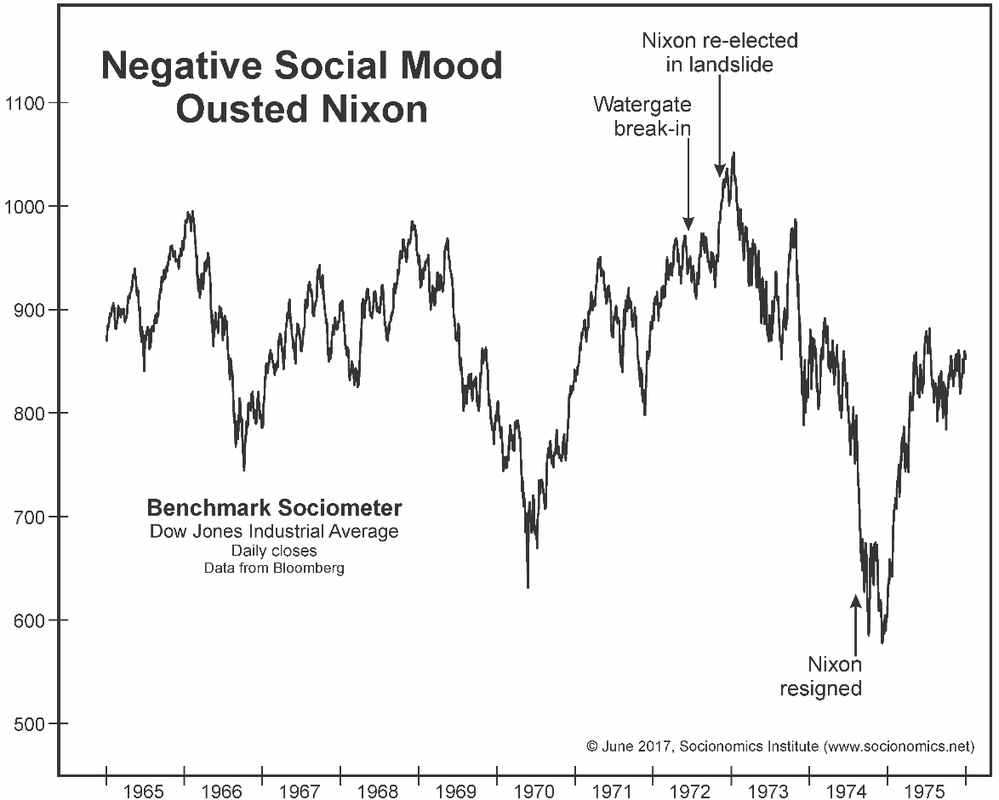 The investigation surrounding President Trump’s administration likely has a long way to go before it is complete, yet it is possible to consider a hypothetical: If the House were to vote in favor of impeachment, would social mood favor the president’s conviction in the Senate and removal from office?

Figure 4 shows the tremendous rally in the DJIA since March 2009. The current mood environment is similar to that of Andrew Johnson’s and Bill Clinton’s impeachment trials, which suggests that any impeachment vote that makes it to the Senate will not find the anger it needs to win a two-thirds majority at the present juncture. 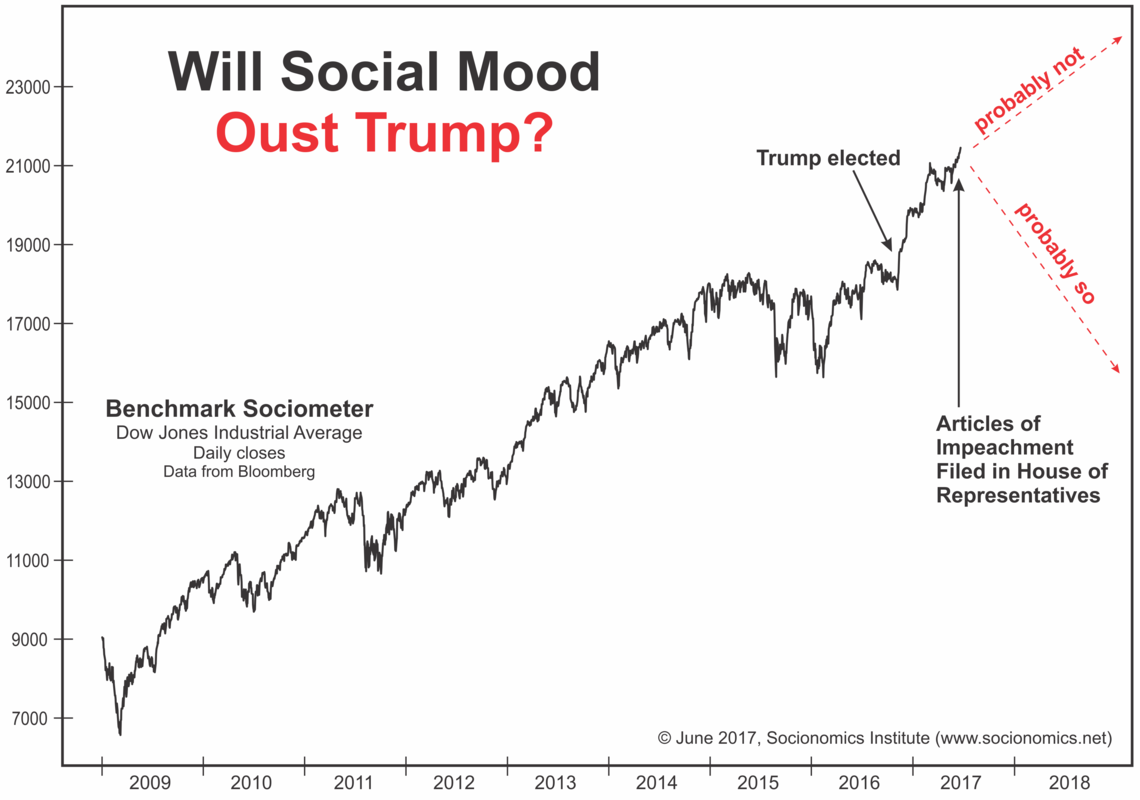 Trump’s Dow chart would likely need to look more like Nixon’s before he faces a serious risk of conviction. We must note, though, that lack of serious risk is not the same as zero risk. While the Senate has never removed a president from office in an impeachment trial, it has voted to do so for other federal officials whom the House has impeached. A handful of these impeachment convictions came during positive mood periods, including the removal of a federal judge in March 1936 and another federal judge in July 1986. While the historical record is sparse, we conjecture that social mood would be a more decisive element in the Senate’s decisions to convict or acquit presidents, due to the office’s prominent status.

Clinton’s impeachment proceedings occurred as the nominal Dow, Dow/PPI and Dow/gold were all shooting toward all-time highs. Nixon’s spiral into resignation occurred as stock indexes were headed toward meaningful lows. Trump is serving as the Dow and Dow/PPI are at all-time highs while Dow/gold languishes well below its all-time zenith. Consistent with the relative performance of these mood measures, Clinton enjoyed the highest approval ratings during his scandal, Nixon suffered the lowest ratings and Trump’s numbers thus far are in between.

If the House decides to impeach Trump, the case could then resolve rapidly. The number of days between the House impeachment resolutions and the Senate’s acquittal was 85 for Johnson and 55 for Clinton.  Nixon resigned 10 days after the Judiciary Committee voted to send three articles of impeachment to the floor of the House.

For now, positive social mood is on Trump’s side. It may be in the president’s interest for impeachment proceedings to begin in earnest now, while mood remains relatively elevated. The longer the investigation drags out, the risk will grow that the mood trend will turn, and with it, the president’s chances to remain in office.

Matt Lampert is the director of research at the Socionomics Institute. He is a graduate of the University of Cambridge and has spoken about socionomic theory throughout the US and Europe. He is a board member of the Socionomics Foundation and editor-in-chief of the monthly magazine, The Socionomist. His research has been supported by the National Academy of Sciences with funds from the National Science Foundation, and his work has been featured by USA Today, CNBC, the Associated Press and other popular news and scholarly publications.

EWI forecasts financial markets. We are the largest technical analysis co in the world, with 25+ analysts covering every major market.

To speak with Matt Lampert, contact Alexandra Lienhard @ Alexandral@elliottwave.com or call 770.536.0309 for scheduling.