In 2015 a Tech Startup called Camp Native did the unthinkable.

Small towns have recently been the focus of a diversification of the tech industry, here's a story of a startup embracing all that small towns have to offer.

In 2015 a Tech Startup called Camp Native did the unthinkable.

In the summer of 2015, Camp Native, located in Seattle, WA, graduated from 9Mile Labs, a B2B Technology accelerator, and was in the midst of completing a seed round.

Founder and CEO, David Woodbury, had the idea of building Camp Native (a marketplace for finding and reserving accommodations for your next outdoor adventure), in a community that embraced the outdoors.

Camp Native moved their operations from the robust tech ecosystem of Seattle, WA, to a small rural town in South Dakota called Spearfish. Here is how it happened and what has transpired.

Woodbury knew Spearfish, SD, to be a beautiful town of just over 10,000 population on the northern edge of the Black Hills. Spearfish had made several top ten lists from sites like National Geographic and Outside Online. When you combine that with the business friendly tax laws of the State of South Dakota and lower cost of operations, Woodbury thought it was worth looking into.

It started with an email.

Woodbury went to the Spearfish Economic Development (SEDC) Website and emailed the executive director, Bryan Walker, suggesting he was interested in moving the company to Spearfish. Walker responded quickly with some skepticism but obvious interest.

Who moves a tech company from Seattle to Spearfish?

Woodbury and Walker scheduled a call and Woodbury expressed his interest in moving the company, inquired if SEDC could do anything to assist him, and discussed funding relationships that might exist within the region.

Walker connected Woodbury with an Angel fund in Rapid City, SD, and brought the idea of bringing Camp Native to Spearfish to his board. After completing the pitches and a couple of months of negotiations, SEDC made an offer to provide funding for furniture and fixtures to set up an office. On top of that, the Angel fund in Rapid City made an investment as well as a local Angel investor in Spearfish. This was enough for Woodbury to make the leap, and in October 2015, he moved across the country to Spearfish.

It's been a year since he made the move and he couldn’t be happier. When he’s not working at Camp Native’s HQ -- a 3,500 sq ft office space in a historic building on Main St. downtown Spearfish -- you can find him mountain biking in the hills, skiing Terry Peak, or enjoying a brew at Crow Peak Brewery.

On any given day at the Camp Native HQ there are 10 total employees working diligently to on board and assist properties with utilizing their growing platform. You can recognize the office by the handful of bicycles parked out front, since most employees choose to commute to work by bicycle. The office is reminiscent of any tech company with ping pong, an open floor plan, and plenty of beer in the fridge. It’s got an energy that draws you in.

But has it been successful?

Camp Native is the fastest growing recreational property reservation platform on the planet. They have signed over 600 properties in less than a year of sales efforts. Woodbury says, “In less than a year we’ve signed more reservable properties to our platform than is offered by KOA who’s been in business for 56 years." They are disrupting a billion dollar industry from a sleepy little mountain town in South Dakota.

Woodbury is proud of what they’ve accomplished in their first year, “We came in and did things different from the start, we knew what the going rate was for sales personnel in this community and we chose to pay 30% higher base salaries. We offered benefits such as health insurance bonus, gym memberships, and unlimited vacation. As a result, we have an amazing core team, 0% turnover, and advocates of our business across the community. We also make sure to get out as a team and support community events.” With reduced costs of operations the Camp Native team is able to get out and become involved with unique experiences. Woodbury recently took the entire team to the Outdoor Hospitality Conference in Fort Worth, TX, to celebrate their one year anniversary. 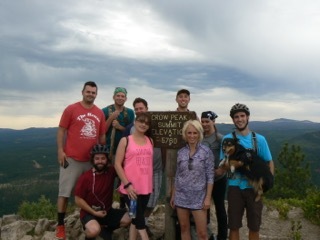 Woodbury hasn’t stopped with Camp Native. He’s helped develop another tech startup in the community by supporting another entrepreneur on the technology side as well as launching a digital marketing agency. He’s even moved a key executive from Miami to Spearfish, and is assisting in launching an Angel fund in town. He says, “In Seattle, I’m just another entrepreneur trying to build a company. In Spearfish, we are rock stars, but more importantly we can have an impact on this community and I can see and feel tangible evidence of that.”

“Camp Native is still an early stage business, but many in the community view it as already successful. Camp Native has come in and provided a new way of doing things, they treat their people well, and they are invested in the community. Spearfish Economic Development took a risk when they committed funds to bring a pre-revenue tech startup to Spearfish, but so far it’s paying huge dividends.” - Steffanie Salazar SEDC Executive Director

Although technology can bridge geographic gaps, challenges still exist with operating a tech startup in a small town. Woodbury says that the biggest challenges are access to capital, and a major airport. Woodbury does most of the fundraising for Camp Native outside of South Dakota so it can be costly and time consuming to get in front of the right investors. Even so, it can be done using platforms like Gust, Angel List, LinkedIn, and F6S. At the end of the day, Woodbury believes that the pros far outweigh the cons and he’s glad he made the move both from a personal and professional standpoint.

Find & book the perfect place to stay for your next adventure. From campsites to lodges, we've got you covered.