Disclosures with the Securities and Exchange Commission are a treasure trove of potential news stories, but you have to know where to look. The SEC’s online database, EDGAR, has a well-known company search section, but there are other, over-looked areas that warrant some attention. Further, there are sections of common SEC records that you should pay particular attention to in order to determine their news value more quickly.

Here are five tips every business journalist should know when dealing with SEC records.

We all know about the SEC’s company filings section, called EDGAR , which contains nearly 200 different document types that reflect various disclosures required for public companies, mutual funds, banks and more. Services like Bloomberg, Morningstar and Sqoop aggregate parts of this database and provide alerts to subscribers.

But the SEC has much more to offer than these company filings. One of the more interesting sections is Enforcement Actions which includes Litigation Releases and Administrative Proceedings , each of which details rulings against companies and individuals investigated by the SEC. In one case, the CEO of VCAP Securities was ordered to pay $1.5 million in damages, and Wall Street Journal reporter Chelsey Dulaney wrote about this . The more notorious case levied against Martin Shkreli was announced here, in addition to the two other federal lawsuits pending. And the SEC charged N.C.-based startup CAUSWave of defrauding investors of $6 million , which The News & Observer’s John Murawski wrote about .

For sure, Mr. Murawski deserves proper credit for uncovering this news. But here’s the rub: he wrote about this development more than two weeks after the SEC posted the charges. And this isn’t unusual! Few reporters ever check the enforcement actions page, and those who do don’t usually check that often. Sqoop plans to capture this data for our users, but we do not currently.

Why is this useful? There are many cases where one company may not have a duty to disclose information, but another party to the transaction does. One example is Airbnb, which is a very large, privately held company. When it raised money, it did not issue a Form D, so journalists really have no way of discovering this news.

However, mutual funds and other investment companies have a duty to disclose. So a search for Airbnb shows every filing or exhibit where Airbnb is mentioned. In some cases it is simply referenced as an example of a company in the on-demand economy, so finding the meat takes a little digging. But, here you can see that the Hartford Mutual Funds invested more than $900,000, and that Morgan Stanley purchased shares in April 2014 with a current value of $109 million. So, with some work, reporters can estimate the size of an undisclosed round this way.

Similarly, there have been other cases where companies have been acquired other businesses for “undisclosed” amounts, only to have those figures later disclosed in xbrl exhibits by the acquiring party, including this acquisition of Seattle-based Interepid Learning for $28 million in cash by Xerox. Earlier news accounts cited the amount as, “undisclosed .”

One of the most common forms companies issue is associated with executive stock compensation. When an insider or corporate officer receives, sells, gifts or otherwise transacts in public company stock, the issuing company is required to file a Form 4.

Many of these turn into news, but the trick is understanding what’s news and what isn’t. Here, Dick Costollo, former CEO of Twitter, is written about for selling $25 million in stock . So why isn’t it news that Sergey Brin sells more than twice that amount every week? The answer resides in the footnotes of the Form 4 where Twitter says that Mr. Brin’s sales are part of a 10b5-1 trading plan. 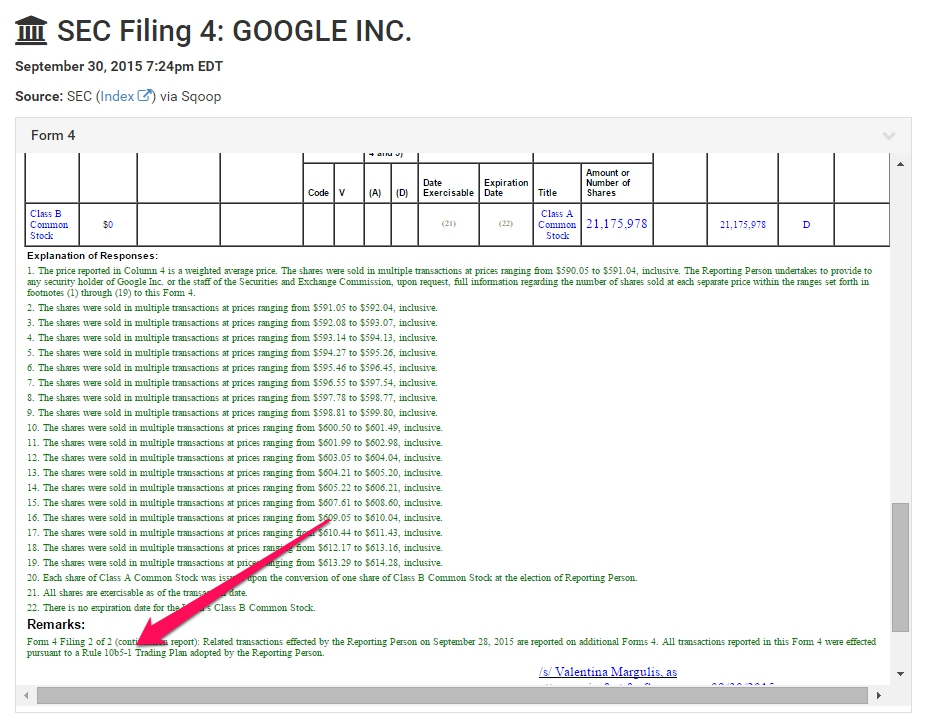 These plans exist to allow company insiders, who are almost always in possession of material, non-public information which precludes them from trading, to sell stock at predetermined parameters. In other words, the sale is a routine one so even though the amounts are impressive, that doesn’t necessarily constitute news.

New trades or anomalous amounts are more interesting. In the future, Sqoop will help journalists quickly understand this information. Currently we translate the codes and do the math on Form 4s.

4. Reading the fine print after the news cycle has died can pay off

When companies report earnings, the first disclosure is an 8-k, which is quickly followed by the official press release and then about an hour later the analyst call that reporters often listen in to. A couple of hours later, the news cycle is over. Or is it?

Sharp reporters will read the 10-Q which isn’t filed until the next day, long after the news cycle. Comparing the risk factors section with the preceding quarter can yield insight into changes in business strategy, competition or other factors not material enough to be disclosed in earlier filings.

Similarly, the 10-Q and 10-K are many times the only public records where significant business transactions are discussed at all. In this case, GeekWire’s Todd Bishop uncovers losses at a subsidiary company with the parent company bailing it out with a $10 million loan. Because he took the time to read the filing.

5. Pay attention to the exhibits!

SEC filings are written by lawyers who oftentimes don’t appreciate brevity the same way journalists do. But the exhibits associated with most SEC filings are generally written in English by PR executives or other business people.

More importantly, you can get to the meat of the news faster by popping open an exhibit than the original filing. The problem is that it is impossible to get to the exhibits from the filing itself. You need to navigate the arcane EDGAR detail page and try to interpret exhibit information from sometimes randomly named files.

This is an area Sqoop does a good job in helping. First, we use data science techniques to understand the exhibit and then name it accordingly, e.g., offer letter, or press release. Further, we present all exhibits on the same page with the original filing, all in expandable view. This gives reporters the ability to assess the filing at-a-glance. 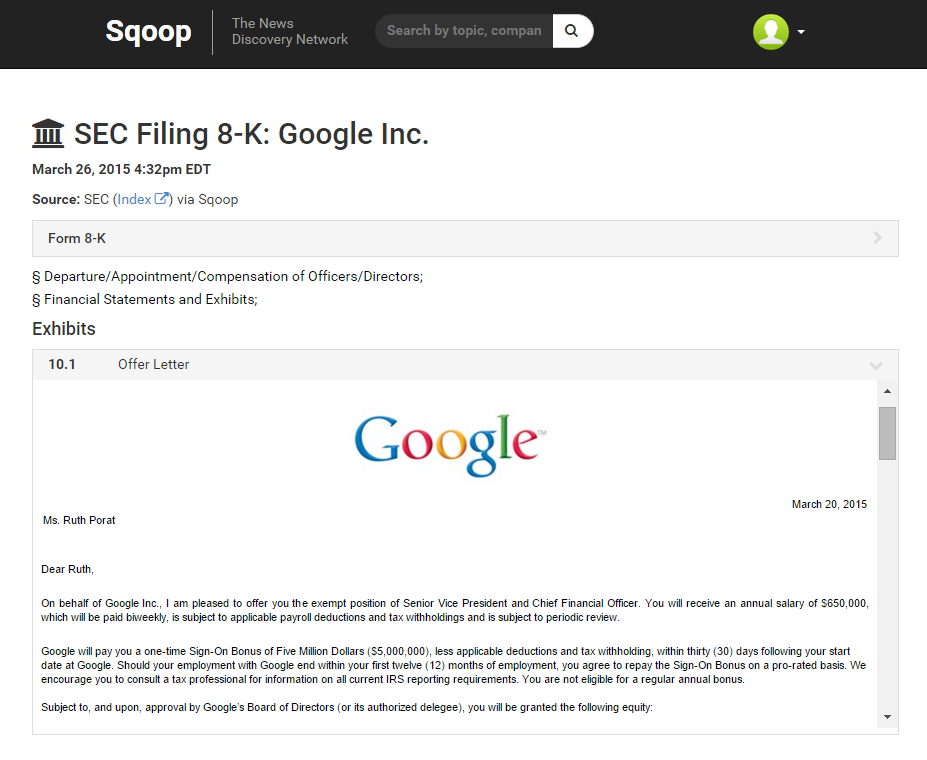 Some reporters have started linking to Sqoop’s SEC filing pages instead of the SEC because it is a better reader experience also.

NOTE: A number of reporters and their work is mentioned in this blog. We are not suggesting that any of these reporters use Sqoop, or even know who we are. Sqoop does not share the names of its users without permission, or unless they acknowledge our contributions to their work publicly via Twitter or other media which happens occasionally.