Breaking Down Breaking News: An Anatomy of Twitter’s Costolo News

Amid the flurry of news and analysis very shortly following Twitter’s announcement that its CEO Dick Costolo would be replaced in his post by Twitter co-founder Jack Dorsey, we chronicled how the news was disclosed by the company and how that informed early coverage of the announcement. One thing is clear: in order to lead the pack in a breaking news situation like this, reporters need eyes simultaneously on multiple sources.

Here’s a timeline of events, all in Pacific Time:

Shortly before 1:08 p.m., Twitter files a Form 8-K with the Securities and Exchange Commission disclosing the CEO transition and including the following attachments: Offer Letter to Jack Dorsey, Agreement with Richard Costolo, and the company’s press release. 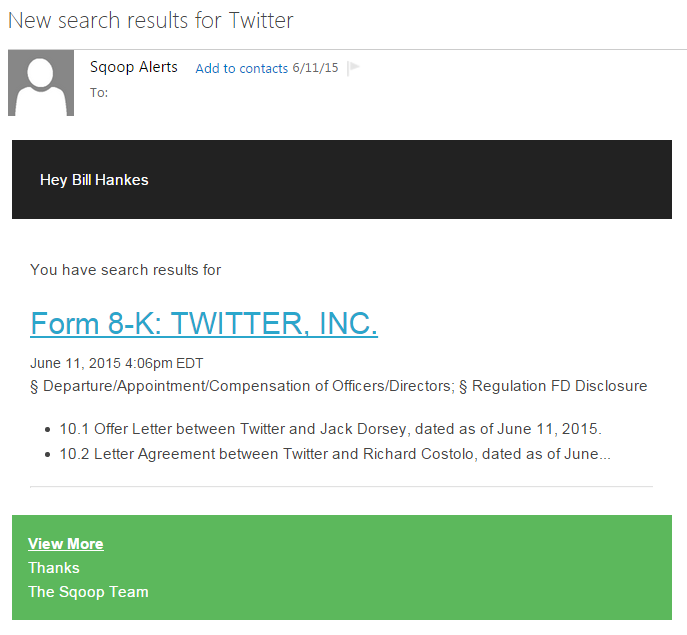 This Twitter case is unusual because of the manner in which the company announced the news: Twitter being Twitter announced the news first over Twitter. And predictably, the earliest stories sourced that medium, and the details were very few.

Within minutes, the SEC disclosure informed stories that included greater detail about the CEO transition.

What happens, however, when the subject of the news isn’t Twitter? The next closest example is when Google disclosed that its CFO Patrick Pichette would be retiring. Virtually all the early coverage of that event sourced the company’s 8-K because that was the first disclosure, and Google didn’t issue a press release, which likely would have trailed the 8-K by minutes anyway. Mr. Pichette announced the news on his personal Google Plus page later that afternoon, and that informed some follow-on stories, but the bulk of stories sourced the 8-K.

The lesson appears to be that journalists must have several sets of eyes in order to follow the right Twitter accounts, incoming press releases and public records sites like the SEC—or Sqoop, which lets you search and set alerts for SEC and other government websites.